The wait is over, documents received, notice given – we are moving to UK!

If you’ve been following my blog, you probably know that after moving around pretty much every one or two years, we’ve been looking for a place, where our older daughter would start school and where we would settle down at least for little longer than a couple of years. After some job search and a lot of wondering what to do, my husband finally received a job offer and we’re starting to plan our move to Warwickshire. I’ll need some more time to provide you with a more exact geographical point of reference.

During the 7 years I lived in UK, I spent majority of my time in London, so I’m a bit unfamiliar with life in smaller towns. My husband, on another hand, spent his childhood in a boarding school in a tiny village in Dorset, so he’s pretty excited to move somewhere closer to nature. So far, it looks like Warwick and Leamington Spa are the most suitable towns, in terms of commute, amount of schools and availability of places to rent. In any case, I’m sure you’ll get to read quite a lot about Warwickshire in the future as well as our experiences with the following:

Finding a school for our older daughter – I’ve already started getting acquainted with the British education system and enrolment procedures, will be writing about that later;

Finding a place to live – it doesn’t look like there’s a great wide choice of properties to rent, but we will know more about that after my husband goes on a house hunting trip;

Shipment – oh yes, the all times favourite; the only thing that makes me not so annoyed with it is that it will be paid by the company; plus, EU to UK seems so much easier than China to Russia, which we had to do once before;

Visa – unlike my husband and our daughters, who are British and can just stroll through passport control, I’m Ukrainian and would have to apply for a family visa, once my husband sorts out all the papers in UK, which means he will go first and we will be joining him later, as soon as my visa’s done;

Pets – a big deal; a hamster, a fish and a giant snail; all pets’ arrangements will be discussed here as well; and as I was asked earlier for a photo of my snail (Xena, the Warrior Princess), I’m posting a photo of Xena and a photo of a fully grown achatina snail: 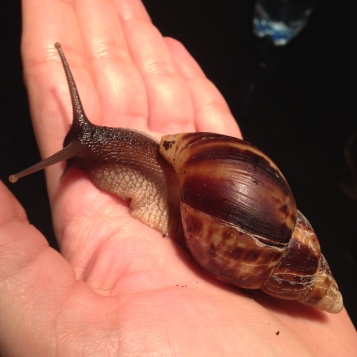 These snails grow up to 20cm or more and I’m thinking that at that size I will be able to teach her how to bark and bring me slippers, full of hopes for this little lady (snails are hermaphrodites, but Xena is, obviously, a female).

The plan for summer – lots of planning and lots of blogging about it.

Looks like our expat journey has gone full circle: we met each other in UK and left it 8 years ago as a newlywed couple. After 8 years, 4 countries and 2 kids we find ourselves on a way back.