Our way of dealing with a dreadful waiting period

After 15 years as an expat, I can honestly say that I’m pretty fine with change. We had our problems, but now we became close friends, who occasionally argue, but always find a way to sort things out. What I hate though is waiting for a change, when you have no idea whether its coming at all or not and if it does, then when and how and what and and… Knowing what you have to deal with is easy; not knowing – that’s pretty unsettling.

My husband’s contract in Czech Republic was coming to an end and we were at a crossroads again. Shall we extend the contract and stay here longer? Shall we look for something else in CZ? Or in another country? There were several factors that were against prolonging our stay here. First, our daughter has to start school (next year, if it’s in CZ) and we would like to find a steady place to live and to work, so she doesn’t have to relocate so often. The company, where my husband works at the moment, prefers hiring on contract basis and that doesn’t provide that level of stability. Second, if my husband wishes to find another job in CZ, there’s only limited number of opportunities for English-speaking expats and learning to speak Czech fluently would take time. So, planning to live in CZ in a long run was a bit tricky.

While we waited for results of sent out CV’s and interviews, life felt very temporary. Although, we moved a lot, in every place we stay, I like to make our life as comfortable as possible. In the end, what could be worse than spending years waiting for something and not actually living it? And that’s what we decided to do during the last couple of months as well.

First of all, I wasn’t sure whether to plan a weekend trip to my friend’s birthday or not – if there’s a move to plan, than we would need a lot of time for preparations. I waited patiently to find out, whether we’re moving or not, until my husband actually told me to book this trip in any case. Several days won’t make much of a difference and I deserve a break (yes yes, I really do :).

Even though, increasing your possessions before the move is not a very good idea, I bought some seeds and pots and set up a small garden for kids on the balcony. Still not sure, when we would move, but at least the summer won’t pass without kids seeing strawberries and marigolds springing to life from the ground.

Last summer we didn’t go on a vacation per se, instead opting for exploring CZ on weekends. It was really interesting, don’t get me wrong, but we still wanted to have a family holiday, where all four of us would spend more time together. So the decision was made to book a trip in July – if we did have to relocate, we would have to do it after we come back.

Finally, we got ourselves another pet. It wasn’t actually for the kids, as much as it was for me. A giant African snail. Very random, I know. Somehow the idea of a snail 20cm large completely fascinated me, so now we have Xena, the warrior princes, happily eating her salads and cucumbers at night. She’s amazing.

All of that meant that we didn’t spend the last months just waiting and doing nothing else. We still felt anxious, of course, but we also continued living instead of waiting and I’m very happy about it.

Then, just a couple of days ago, we received the news we’ve been waiting for – my husband got a job offer and we’re moving again :) Now, I have to sort out pet relocation (for our snail, hamster and fish), we had to plan the move around our family holiday and I still intend on trying to squeeze in some flower pots into the shipment, but at least now I know what I have to deal with and it’s all fine.

P.S. Stay tuned to follow another relocation of TInyExpats (5th country for the 5 year old and 3rd for the 2 year old). The older one will be hitting school, so we’ll try to stay put for a while longer this time. 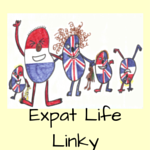