Multicultural kids? Help them see all the benefits! – for Easy Expat 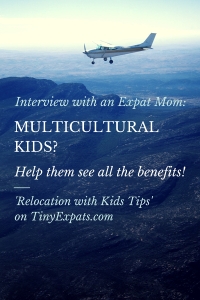 Expat parents already have quite a lot to worry about when it comes to their kids – new friends, new country, new language. At the same time, you don’t want your kids to forget where they are coming from as well. But what if you add to that parents with different backgrounds, coming from different countries? How do you help your children stay in touch with their multicultural heritage?

With me being Ukrainian and my husband – Russian, we never thought there would be any problem with that, as our cultures are rather similar and we both use the same language at home. However, taking into account recent events, there are now new issues, which we would have to face with our kids, when they grow up enough to discuss politics. In any case, we are determined to make sure our family will be a proof of Russians and Ukrainians living in peace.

Recently, we had a discussion with our 5 year old, who was trying to work out her nationality. Russian? Ukrainian? As she was born in Germany, she also considered that she might be German. To make it even more confusing, she’s British according to her passport. In the end, we decided to get back to that question later, for now agreeing that she can be all of the above (accept German, I guess, as she left Germany at 1.5 years old and hardly remembers it).

How do other families deal with this situation? I talked about it to an expat mother of multicultural kids. She comes from Singapore, her husband is Dutch and they live with their two kids in Thailand.

What languages do you use at home?
Primarily English. My husband speaks mostly Dutch to the kids and I’m picking up the language along the way. Although, I also try to speak Malay to them …smattering – it’s so broken, it’s embarrassing!

If asked, where they are from or about their nationality, what would you usually say?
Hmmm…this one usually comes out as a mouthful. Nationality-wise going by their passports, they are officially Dutch, although my daughter is Singaporean too. My son is not – and that requires a whole lot of explanation!

How do you balance different cultures in your childrens’ lives? Do you try to involve their heritage on the daily basis? (Languages, traditions, fairy tales, etc.)
Culture and heritage to us means family time. Doing things together as a family comes first above anything else. A big part of my culture revolves around food – that’s huge from where I come from and my husband’s family are also enthusiastic foodies so we have a good blend of food culture going on. We always make an occasion with food out of nothing!

In Singapore, apart from our own Malay traditional culture, we are also exposed to the Indian, Chinese and Eurasian culture and we mostly celebrate the festivities along as well as part of the country’s tradition – but having lived in Thailand for long time, the kids hardly get exposed to them.

Apart from that, because I’m not all that into traditions myself, and although I would go along with traditional obligations required of me when I’m back home, I don’t necessarily feel the need to impose them on my kids. My husband’s Dutch culture is pretty laid back – they tend to do a lot parties! I’m not so sure about fairy tales, but the kids have been exposed to stories regular Dutch kids grew up with like Dikkie Dik, Nintje and Jan & Janneke on an almost daily basis.

In a way, not much balance required – we sort of pick what’s convenient and logical to us. It’s like we created our own culture altogether and then mix them up as they deem fit without even thinking about it! ( I didn’t realise this is a such a tough question for me to answer!)

Which culture, would you say, has the strongest presence in their lives? What would you advise to the parents of TCK’s?
Hmmmm…I don’t think there’s any. They probably are more Dutch because they speak it better than they do of my native language, and getting exposed to all the Dutch books, Dutch cheeses and Frughtenhagel/Hagelslags (Chocolate & fruit Sprinklers) on their bread for breakfast. And they eat a lot of rice, too. (there, food again!)

Advise?
I’m not sure if I have any, but if I have to a leaf from my books of experience, it is to make it fun for them. Expose them to the different culture and lots of new things so they learn to appreciate and view social differences with an open mind. Create an adventure that would make them passionate about the world. Lastly, always speak your native language to them from a young age (and I wish I had been more consistent, but I truly do suck at my own native language!) – because I have seen that it pays off in the end when they grow up to be tri-lingual.

This interview was put together by me for Easy Expat/ Blog Expat together with Ann from Grubbs’n’Critters blog. Thank you, Ann, for participating!