Apart from having an amazing time with my friends in London, I also looked forward to three nights of blissful uninterrupted sleep (although, going to bed early was out of the question, nobody expected me to get up at night or at an ungodly early hour in the morning). Obviously, fate had its own plans. Quite possibly due to jumping between heat wave temperatures outside and near to freezing air conditioned temperatures inside during my trip to London, I was left with blocked nose, sore throat and a headache. In such company, I was able to fall asleep very late at night and was already up by 6. Still in bed, I tried to convince myself that I’m being absolutely silly, but had to face the truth – being away from kids doesn’t always mean being able to sleep well.

Actually, Saturday was the perfect day to prove that things can go right even when they go wrong (you can read another example of this theory in this post about our trip to Kutna Hora). Even though I felt crap, my husband managed to cheer me up by sending an update on kids situation: they had ice-cream for breakfast, planned MacDonald’s for lunch and looked positively ecstatic about it all on the photos attached. I guess, a weekend of fast food shouldn’t cause irrevocable damage.

The plan for the day was ‘an active afternoon’ followed by ‘a glamorous dinner’. No other details were disclosed, so we just had to make sure to pack the right outfits and wait for further directions. As I was staying at the birthday girl’s home, I had a chance to negotiate this secrecy clause with her, voicing my concern that at my current state ‘an active afternoon’ was pushing it a little. The afternoon activity was supposed to be indoor skydiving in a wind tunnel. Although, I would’ve tried it otherwise, I thought it would be best to go to chemists instead and buy any pills I could get my hands on to make sure that I felt somehow better by the evening.

Here came another unexpected turn – wind tunnel people called to say that their wind tunnel broke down. Arranged transport waiting outside, a large group of guests inside all ready to tackle that ‘active afternoon’ whatever that could be. Birthday girl’s husband was quick to stop the raising panic amongst masses and announced that instead of going for an indoor skydiving we would all drive to a picturesque English village for a pub lunch. I resolved that to keep up with the spirit I should participate in this particular activity as well.

Off we went, for an hour and a half’s drive to a beautiful English countryside (with a quick pit stop at chemists, where I bought some hard core pills that could practically raise the dead). I’ve already written about this particular pub before, so if you wish to see some more photos and get contact details just click here. The Five Horseshoes is an amazing place – rolling emerald hills with white dots of ship in a distance, an amazingly cute old building and finger licking food. The menu was quite extensive offering anything from crab to stake, but I haven’t been to a proper pub in ages, so bangers’n’mash it was for me.

I guess, afternoon activity was rather less active than initially planned, but it was great non the less. And what was not to like? Beautiful location, delicious food, amazing company. I took my medicine and was feeling almost human again and ready for the evening’s action. 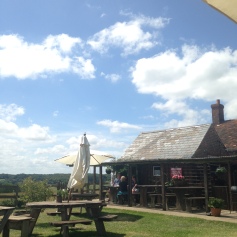 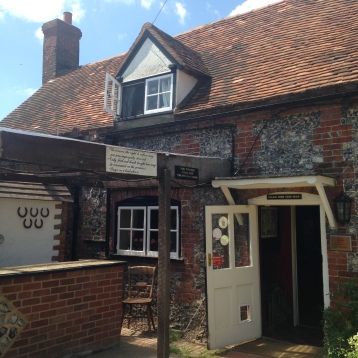 P.S. If you missed the first part of my journey, you can catch up here.