This was a weekend of Christmas activities for us, I would say. The Pardubice Christmas market opened on Saturday and we decided to go and check it out straight away without waiting until Sunday, when the Christmas lights were scheduled to go up. And we learnt that it was a good plan, but more on that later. 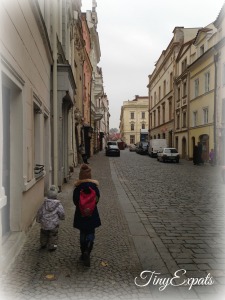 The closer you come to Pernštýnské náměstí the more you can feel the holiday aroma in the air and to me it smells like cinnamon with a whiff of mulled wine. As we entered the square we quickly realised where the cinnamon smell was coming from – of course, trdelniki!

I’ve got to say that trdelniki are now my favourite Czech dessert. Although, just recently pickledwings told me that they’re not Czech at all (you can read it below his article about Brno Christmas Market). In any case, that doesn’t change a thing for me – trdelniki would still remain a sugary trap for me, Czech or not.

As it usually is with Christmas markets, there are a lot of various food stalls. Cheese, sausages, sweets, nuts, mulled wine – all filling the air with a mouthwatering aroma. 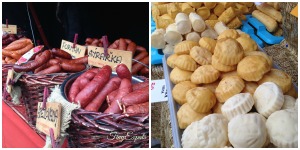 You can also find different handmade gifts and toys around the market. My girls, obviously, could not leave without getting something for themselves. 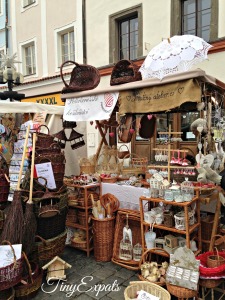 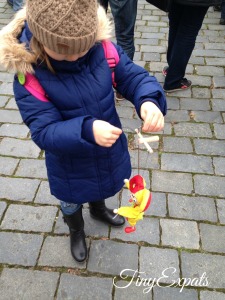 Another necessary buy that day was a Christmas wreath for our front door. We went for ‘childish and carefree’ look this year. I think, all our neighbours know by now that we have to little (but at times rather loud) girls and if they didn’t – there wouldn’t be any doubts left. 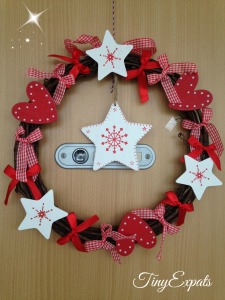 There’re several nativity scenes around the Christmas tree, but the main attraction (not only for my tiny expats, but for all the small children present there) was a corner with live animals. There’s also a stall selling some snacks for them, so you can feed a donkey or a sheep, if you want. 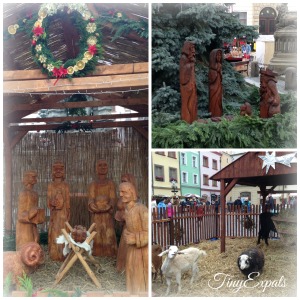 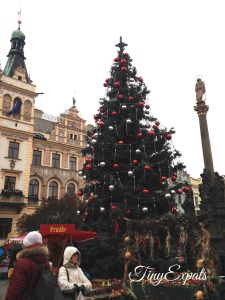 There also was an interesting show with birds of prey that day. A lady presented different species, telling where they live and what they eat. Later she started sending them to fly and that was the most enjoyable part. The birds were flying rather low, perching on windowsills and stall tops, and they did not look like they particularly wanted to get back. So half of the square was mesmerised by the birds and, I think, making bets whether they would actually get back to the lady or not. This was all for the good cause as she was also collecting money for their organisation (my Czech was not completely sufficient in this case, but it seems like it had something to do with the protection of these birds). 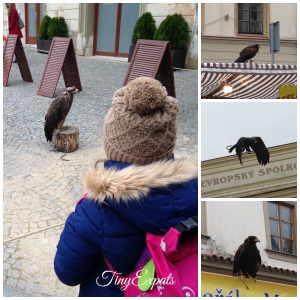 The next day the girls were all psyched up to see the Christmas lights (or at least, our older daughter was; the little one was probably just joining the ‘fun anticipation’ dance with her sister for the sake of it). We came to the Pernštýnské náměstí just around 4pm and that was when we realised how good it was that we checked out the market a day before – the square was completely packed, so good luck going around it with a stroller. Nevertheless, we found a clear enough spot and prepared to wait  for the lights. 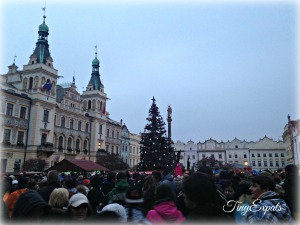 In a matter of 5 minutes they did go up and in another minute or two what seemed like half of the square started to move back, away from the square. Of course, lights went up – what’s the point of hanging here any longer. Anyways, we didn’t think so and stayed for a while, having a cup of mulled wine and meeting up with fellow expats in Pardubice (whom we got acquainted with thanks to this blog – I’m loving it!). 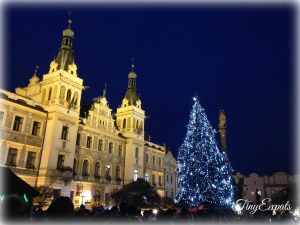 Now that the Christmas decorations are all over the city, our kids decided they want a Christmas tree at home as well. Any reasonable explanation that it’s a bit too early and we would still have to keep it till mid January, so almost for two months, did not work whatsoever. And why not, actually? 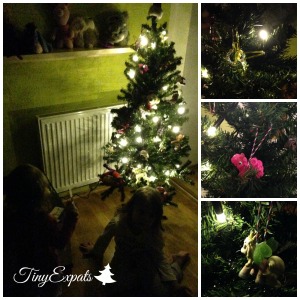 This year we have a tiny explorer at home again, who wants to take down all the decorations and could (and did) pull down the whole tree, so we went with our tried and tested childproof version again – you can see that we used all kinds of safe (!) small toys. This way taking decorations down and putting all of them back up again is our new most popular game (and considering that it gives me some quiet time – my favourite game as well).