Starting over in a new country, TSS blog crawl

Happy New year! Welcome to the December #TrailingSpouseStories blog crawl.
This January we talk about beginnings. We all were there at some point in time. We all started out in strange lands. How was it like starting over in a new country – if you have done it multiple times, does it get easier or harder? And what are you building in this new year?

Hm.. Does starting over in a new country ever get easier? I guess, it does. It’s one thing leaving home and family for the first time and going to study in another country, when you’re 17, and quite another to move together with your husband and two kids to your 6th country, when  you’re thirty-something. Less scarier, for sure.

This was the first New Year in Czech Republic for us. There’re several things that make me feel more at home in a new country.

It’s definitely easier, if you can understand the people around you. While living in the UK, my husband and I had no problem with communication, being able to speak English fluently.
Germany was tougher: we both learnt German in uni, but there was one problem – after graduation we could make a marketing presentation in German, but were hardly able to order a meal in a restaurant, so we still had to go to a language course, after we moved.
China was a challenge in many ways. We did learn some words and phrases, although I would never say that I speak Chinese. Considering that only a small percentage of locals speaks English, we had to become experts in pantomime. I still remember our first visit to the local chemists, trying to act out the symptoms to get the right herbal remedy. It would’ve been fun, if it was not for the fever we had at that moment :)
Russia was the easiest one, of course, since Russian is our mother tongue.
And now we’re in Czech Republic. A lot of Czech words are similar to Ukrainian, so I can at least guess some of what people are saying. Although, now I’m not sure whether it’s such a good thing. I think, I would’ve made an effort to learn more, have I not been able to understand anything at all. As it is, I’m being kind of lazy about it, postponing language courses all the time..

I think, making friends is much easier, when you’re a student. Some of my best friends are still the ones, who I met during uni time in London. I know some people go back to studies, for example, doing MBA in a new country and it also improves their social life immensely. So far, most of the new friends that I made were fellow expats, I guess, it’s because we find ourselves in similar situations and have more in common.

Oh, how I missed kefir or black bread in the past! Especially in the beginning, when I had to suddenly change the eating habits. It might not be that drastic, but you definitely notice, when you cannot buy your favourite food any longer. China was the toughest one, where even yogurts would taste different.
But then again, in any country you would find a new favourite, work out new dishes you can make out of the available ingredients and (at some point) you would actually stop bringing so much food in a suitcase after visiting the family.
Now, in Pardubice, I can get myself a pack of kefir any day. But what actually made me happy was finding lemon curd, which I didn’t eat since leaving London :)

It does make a huge difference! I haven’t realised how much I missed the sun until we moved from Russia to Czech Republic. So far we haven’t had these weeks of overcast sky, to which we got used to while living in Moscow.
Pollution issue in Shanghai was also a big deal. At times the smog looked like very low clouds or a fog coming down on the city.  Once my daughter decided to play with the leaves on some bushes in our courtyard. I was fine with that activity until I noticed that she had completely black hands from all the residue that set on the leaves. I tried not to think about the air that we were breathing in.

If I feel comfortable in a new flat, everything else seems more manageable already. It felt very cold in our flat in Shanghai as there is no such thing as central heating below Huai river and Shanghai is just that tiny bit South from it (heating up with air con is totally not the same). You can add single glazing to the equation and you get a feeling of living in a fridge..
I feel very blessed sitting now with short sleeves in our Czech home, with heating system working as it should while there’s snow outside. Ah, bliss..

Home is where your heart is

Last, but by all means, not least. The most important thing of all is who you are moving with. I would move again any day with my husband and kids. As long as they are with me, I am at home, no matter where. 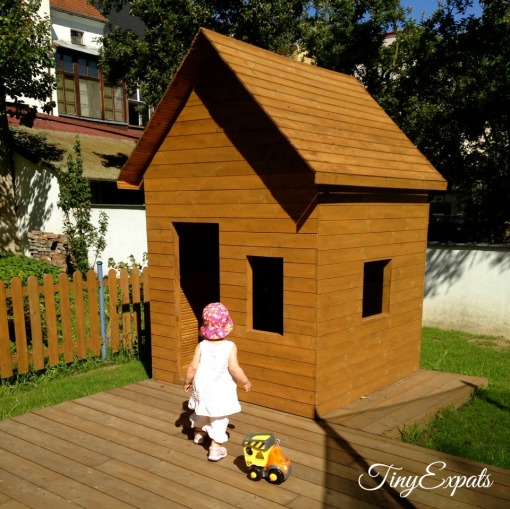 Read more #TrailingSpouseStories at the links below:

Issa’s story on You Want To Be Rich on how the #trailingspouse life seems to be painful than easier, being haunted by the possibilities and what could-have or might-have-beens.

Yuliya’s story on Tiny Expats on what things made it easier for her to move to a new country. She’s quite the #trailingspouse veteran!

Rachel’s story on Me, Myself & Atlanta on how leaving UK has led her to the best roller coaster ride ever.

Didi’s story on D for Delicious on how being in a new country is being reborn, except that it comes with a lot of baggage