I’ve been writing a lot about our travels with tiny expats, but the last weekend was a solo occasion for me. For the first time since actually having kids, I left them at home for a couple of days. Well, actually, I did leave our older daughter for a couple of days with daddy and grandma, but that was to go to a hospital to give birth to the younger one and I don’t think it counts.

The perfect excuse to get out and have fun was to attend my friend’s birthday in London. My husband was set on making it from Friday till Monday with the help of ‘you can do anything your mommy wouldn’t let you do’ policy, our older daughter was excited as I told her she’s in charge of taking care of the baby for the weekend and the baby was oblivious, hence happy till the last moment before my departure. Although, I was a bit worried, I was also definitely ready to ‘let it go, let it go…’ (God, I don’t remember how many times I heard that song already with two girls in our household).

I had to take a train from Pardubice to Prague. For about an hour I just sat there, no music, no book, just letting the feeling of not having to be on alert for a baby emergency at any given moment. It felt wonderful. When you need to get from Prague’s central station to Prague’s international airport, there’s an option of hopping on a so called ‘Airport Express’. Sounds serious enough, but in fact it’s a normal city bus that takes you from point A to point B across the city. With no air conditioning. During a heat wave. Anyways, I refused to let half an hour of scorching heat to spoil my mood – at least, that was half an hour in scorching heat without two little kids complaining about that heat, so that made everything so much easier to deal with.

There’re lucky people out there who can eat cakes and burgers all day long, yet you won’t be able to tell that they do by looking at them. I’m so not one of them. Watching my carbs, drinking plenty of water and exercising. That’s part of my daily routine. This trip, however, was miles out away from it, and to celebrate this occasion I ordered the tastiest loveliest mango cheesecake I had in years. And to put a cherry on top, I also got the third book of Bridget Jones, which I somehow never even heard of before. It’s so much fun reading about other people struggling with bringing up small kids, while sipping latte with cake, while your own kids are taken care of.

By now, I already received several photos from my husband confirming just how well taken care of they are. On one of them he showed results of their food shopping (ice creams, chocolates, cookies and pasta). Another pictured both of the girls happily eating chips with ketchup in our bed. I didn’t even want to know.

The flight was great. I had a lovely companion, a lady with whom we had some wine and a lighthearted conversation (always a perfect combination). The passport control officer in Heathrow asked me what the purpose of my trip was and I had to give her the official version of it (after all, shouldn’t you always tell the truth at passport control?): “The 10th Anniversary of the 25th Birthday”. That information made the lady checking my passport pause for a while, looking off into the distance. “Well, that’s a bit unusual. Thanks for that”.

My friend met me in the airport and we drove through the streets of London, where I haven’t been for 8 years, and it felt like home. It was time to sleep, as the next couple of days were just packed with fun stuff to do on a very tight schedule. More coming up soon ;) 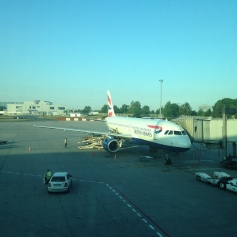