In October, Pardubice hosts several interesting events all as a part of Pardubice town festival. The most famous of them is probably the Grand Pardubice Steeplechase, but there’re also concerts of different bands and dance groups taking place on the Pernštejn square and, what seemed like the most interesting for our kids, a Lantern Festival.

I was told about this activity by the locals, who knew I have small kids, otherwise I wouldn’t even have known what to do or where to go. So, first of all, we had to buy the lanterns; they are sold in stationary shops. You can buy either old fashioned lanterns, where you have to light a real candle inside, or opt for a modernised version with a battery. We chose the second type and we were very happy that we did seeing how our kids wave their lanterns around – no candle could’ve survived such a treatment.

The plan was to go the the Pernštejn square and join the crowd for a walk through a park and along the river. When we were nearing the old town, we noticed that some people actually took a turn and headed towards the street that leads from the square to the castle. We were not sure what was going on so decided to follow the original plan. Oh, well. Those locals actually knew better. We’ve never seen the square so packed before!

There was a group of people in historical costumes gathered around the entrance to the town hall. After a short while we saw a procession with torches coming out of the main entrance and everybody turned to follow them. It took quite a while for the whole square full of people to somehow fit into a narrow street leading towards the castle. That was the street where some locals went to directly, avoiding all that wonderful pushing and squeezing and getting to the head of the procession effortlessly. That’s something to remember for the next time.

The going was very very slow. It seemed like everybody living in Pardubice went there with their kids aged 0+, so we all went at the pace of two year olds carrying the lanterns :) The last effort had to be made at the narrow gates leading from the street to the castle grounds, but once we passed it, the walk became much more enjoyable. There’s something very festive about walking with a lot of other families, with all the kids carrying the lanterns, under the old trees with a view of a beautiful castle. 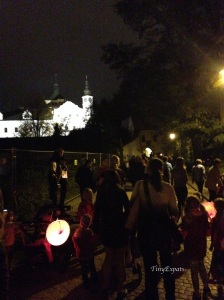 Rather gothic looking monks stood all along the way directing the procession.

When we reached the Labe, we saw a lot of people already on a bridge and many stopping over along the river bank. As we got closer to the Arnošt dock, it was clear that there was no point for us to go further – there were already loads of people there and we didn’t feel like getting into a crowd again. In the end the fireworks display looked still very beautiful from a river bank a bit further away.

In the end our kids were very happy about the whole evening and we were rather tired from manoeuvring them through the crowd, but it was definitely worth it :)